Questions that Arise When a Loved One Dies

Why is it taking so long for me to feel better?

You may be asking this question of yourself after only a short time following the death of a loved one. Grief feels crazy at times and you want it to be over with so that you can feel normal again. However, it can take many months or sometimes years (after a violent and tragic death) to return to “normal” and even then, normal will be different than it was.

Roller coasting emotions, foggy thinking and poor memory will take time to ease up. Accept the turmoil, allow it to come and go and this will lead to an eventual lessening of the symptoms of grief.

What can I do to make it better?

Change your attitude about the grief: allow it to be part of your life instead of fighting it. Many people feel their grief pain and, not knowing how normal it is, will become fearful which leads to more intense grief symptoms. Give yourself permission to experience the varied feelings of grief which will ease their intensity over time. Knowing that your memory is going to be poor, or that concentration will be hampered, or that low energy levels come with the territory helps to lighten things up a little. Grief expresses itself in a variety of ways.

You mean I’m not going crazy?

Grief is paradoxical and often confusing. In simple terms it is a complicated journey.

When grief feels out of control and “crazy”, it is normal. When you are in control, not feeling much distress and thinking you are doing remarkably well you may be sitting on a time bomb. Yes, there are times when grief seems uneventful and this could mean that the lost relationship wasn’t very meaningful but not necessarily. If it was a special and close relationship, there will most certainly be turmoil and pain; if not now, later and intensely.

Putting it simply: when grief is bad, it’s good and when it’s good, it’s bad. 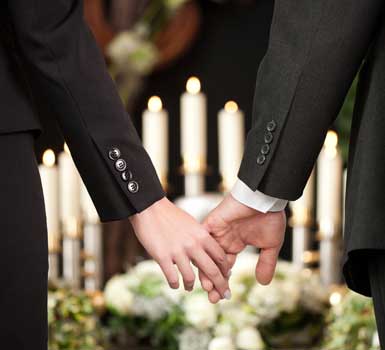 What do you mean by unhealthy grief?

The first thing to remember about unhealthy grief is that you can’t determine whether it is happening for a long time; likely a year or more after the loss. In other words, apart from blatant denial of the loss, most grief symptoms are normal for the first many months after a death.

There are four kinds of unhealthy grief. The first has already been mentioned and could be described as “absent” or denied. A person hides their grief out of embarrassment or in an attempt to protect other loved ones.

The second type of unhealthy grief is “prolonged grief” which means that a lot of time has passed and the intensity of the grief pain isn’t lessening and may even be getting worse. Sometimes this is normal i.e. when the relationship was longstanding and very committed or when the loss was a murder or suicide. Other times it may mean that the bereaved person has “unfinished business” with the deceased and can’t or won’t let go.

Type three is “delayed grief” where the mourner is too busy to grieve and only feels their upset when they slow down or are no longer distracted.

Type four is the “exaggerated” form where one or two strong emotions are experienced and few others. Remember, all emotions are normal in grief so this usually means the others are being held back for some reason.

What can I do to get better or back to normal?

Allow some time to pass and don’t fall into the trap of trying to “rush” your grief. This can be easier said than done. Secondly, as mentioned above, allow the turmoil to happen naturally and don’t fight it. Thirdly, try to get some exercise: long walks are perfect. Fourthly write about your experience (including a letter to the person who died).

Finally and probably most helpful of all: talk about your experience (again and again with feeling) to a good friend.

Denis works with couples and individuals. His areas of interest include marriage, grief and stress. He also counsels people who suffer from depression and anxiety symptoms, as well as those struggling with personal growth issues.

Denis is eclectic in his use of psychological approaches, which include Adlerian, cognitive/behavioural, systems, psychodynamic, brief solution focused, existential and emotionally focused therapies.

Denis is a popular speaker who presents talks and workshops on a variety of topics including marriage, grief, retirement, emotional maturity and family relationships. He has published a book titled, “Marriage Can Be Great!…no really.”

Denis was a Clinical Assistant Professor of Medicine at the University of British Columbia. He helped to start the first hospice program in B.C. in 1975.

Denis received his Master of Arts degree from the University of British Columbia in 1977 and works as a Registered Psychologist. He is a member of the B.C. College of Psychologists and the B.C. Psychological Association.

Most importantly Denis has been married to Maureen for over thirty years and they have four children.