A Resolution for My Dad

Toby looked quizzically at his father, who paused as he considered the question his own sister, Toby’s aunt, had just posed. What was his New Year’s Resolution going to be?

Toby’s own resolution had been easy- to continue in his quest to be the first student in Miss Picton’s grade three class to read 100 books, thereby winning the coveted prize, a $25 Playdium certificate…but who would he go with? …his Mom or his Dad?…His Dad seemed to really like Playdium and it would be fun to race against him on that Motorcross game… but his Mom so often seemed SAD these days… and she had looked like she was having fun when they’d all gone to Playdium last year. Maybe that would cheer her up. Toby often felt like he was the tightrope walker he had seen in the circus last summer… being so careful 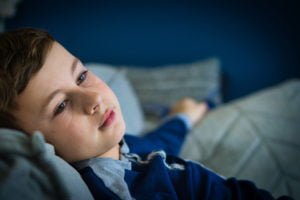 about what he said or did so as NOT TO HURT Mom and NOT TO OFFEND Dad. Life had become so much more complicated since his parents’ separation last Spring. They hadn’t even gone to their Mayne Island cottage where Toby and Mom had usually spent every summer. Dad had explained that the cottage actually belonged to HIS side of the family, and Mom was no longer welcome. Even so, Dad didn’t go ONCE with Toby last summer. It all seemed pretty weird now… like having to MAKE AN APPOINTMENT to see your Dad… or to see your Mom, when he was already with Dad. Just last year both Mom and Dad were easily within reach, just beyond his bedroom door…and Toby hadn’t ever considered that could change… then his Dad had moved out, to that little apartment until something MORE SUITABLE became available… and now Toby’s house had a For Sale sign outside… well at least with his SHARE from the house, Dad might be able to unload his noisy roommate, Alex, who was ALWAYS watching the TV and eating ALL the good cereal in the kitchen. But Toby realized things could be even worse; his best friend Justin, whose parents separated not long before Toby’s, complained about his own father’s STUPID girlfriend and her REALLY ANNOYING kids. Toby thought that it might sometimes be okay to have some playmates around, but at least he didn’t have to share his Mom or Dad with someone else, that would be TOO MUCH… it was still pretty strange being ONLY with Mom or ONLY with Dad… it gave him a kind of lonely feeling, especially when Mom often seemed sad and worried. Toby still wondered why they couldn’t be all together. They’d tried to explain, but their reasons seemed kind of dumb. Toby had begged them to TRY AGAIN… and he’d offered to help solve THEIR problems by keeping HIS room tidy and cleaning up after the dog, Ruffus. Toby wouldn’t stop looking for GOOD SIGNS but they sure were hard to find, especially with his Mom complaining about EVERYTHING his Dad had done TO EVERYONE and the way his Dad talked to his Mom, CALLING HER NAMES and SWEARING at her when he didn’t like her comments and questions… didn’t Dad know that was HIS Mom and those names cut Toby like a sword?

Toby jolted as his Aunt Carrie gently poked him, playfully teasing him about being “out there… somewhere near Seventh HEAVEN”. Toby nodded and realized privately that he was probably a little closer to HELL. How he hated it when his thoughts drifted towards ALL those things that had changed since his parent’s separation … it always left him feeling DOWN… and POWERLESS. But, what had his father’s answer been; what was his Resolution? Could it have been to TALK NICELY to Mom and to NEVER SWEAR at her again? Toby crossed his fingers tightly, and then his legs too, for extra good luck. He knew that if Dad made that kind of resolution, Toby’s own life would be a little easier. And what about Mom? What if she resolved to ONLY SPEAK FAIRLY about his Dad? Toby folded his arms across his chest, squeezed shut his eyes and made a wish. He hoped that wasn’t too much for an eight year old to ask.

Photo by Leo Wieling on Unsplash

For over 40 years Nancy has practiced as a Registered Psychologist, specialized in assessing and treating children, adolescents and families. She has practiced with Denis Boyd & Associates since 1991; prior to that she worked in varied government and private programs.

Nancy supports children and teens who present with a range of mental health concerns including anxiety, depression, ADHD, adjustment, trauma, and family issues. She assists families and parents in their intentions to effectively support their children’s emotional development and well being.

Nancy graduated from the University of British Columbia in 1977 with her Master of Arts in Clinical Psychology. She is a member of the B.C. Psychological Association.